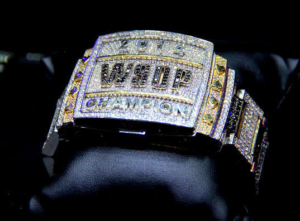 The fact that the players who made the WSOP final table used to have four months to prepare created an interesting dynamic that diligent players could exploit. If you happened to make the final table with a short stack, you had four months to study exactly which hands you should be willing to go all-in with when the action folds to you. This high-risk all-in or fold situation just so happened to occur on the second hand of the 2015 WSOP final table.

On the second hand of the final table, everyone folded around to McKeehen, the big stack, with 150 big blinds, who went all-in for both Chan’s and Butteroni’s 15 big blind stacks. Chan woke up with K-Q in the small blind and had what I thought was a difficult decision. I asked my followers on twitter (@JonathanLittle) what they thought about this situation and I got a wide range of answers. Some said Chan should fold because he had to wait four months for this final table, which is completely irrelevant. Others said he should fold because he “only” had K-Q. Others said it was an obvious call. What do you think?

Take a minute to actually think it over.

You can actually figure out the optimal pushing and calling ranges for each player involved in this hand using an Individual Chip Model calculator. Of course, these programs only look at push or fold scenarios. If McKeehen implements a min-raise or limping strategy, all of this changes. On the second hand of the final table, you have to guess as to whether he will have a min-raise and pushing strategy or only a pushing strategy. While I would likely use only a pushing strategy in this exact situation due to being able to apply maximum pressure to the two short stacks, min-raising is certainly an option, especially if you assume your opponents have studied the push or fold scenario.

Assuming McKeehen is pushing optimally, Chan can call with 15% of hands, including 6-6, A-5s, K-Ts, A-8o, and K-Jo. Since K-Q is in that range, Chan has an easy call. The main time Chan should fold to an all-in from McKeehen is when he is pushing with only reasonably strong hands that flop poorly, such as small pairs, A-x, and decent K-x, which implies he is min-raising everything else, because K-Q is roughly flipping or only slightly ahead against that range.

This analysis results in Chan having a somewhat easy call. Had the payout structure been “normal”, Chan would have a very close decision. If you want to succeed in poker tournaments, be sure to study the math away from the table so you know what to do when any tough situation arises. You can check out ICMizer here. Now that there is no break before the final table, you better study up!

Thanks for taking the time to read read this blog post. Be sure to check back next week for another educational poker hand. Good luck in your games!