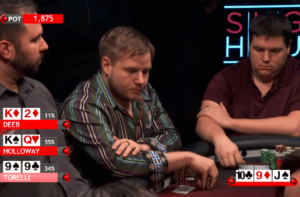 The following extremely interesting hand example is featured in my book Jonathan Little on Live No-Limit Cash Games, Volumes 2: The Workbook. It took place in a live $10/$20 no-limit hold’em game. Leading up to this hand, I had been fairly loose and aggressive, although certainly not crazy.

I raised to $60 out of my $8,000 effective stack with 2c-2d from second position at an eight-handed table. Only the Hijack, a loose, aggressive guy, and the Small Blind, a tight, aggressive kid, called.

While raising from early position with small pairs is speculative, I much prefer raising to folding or limping, especially when deep stacked, as long as I do not think my opponents play too well. If you think your opponents will frequently 3-bet before the flop or not pay you off if you make a set, you should fold. Do not think that you have to play marginal hands like small pairs from early position simply because they are traditionally thought to be “strong”.

While I like my idea of betting both to get value from numerous worse made hands and to charge the draws, with stacks $8,000 deep, I should have bet a bit larger, perhaps $130 instead of $110. Although this sizing error is not too big of a deal, you want to get as much money as possible in the pot without tipping your opponents off about the strength of your hand. Building the pot early will allow you to invest exponentially more money later. Especially with a set, I want to be able to invest as much money as possible on the future betting rounds.

Both of my opponents called. When both my opponents call, I put them on somewhat wide ranges containing most reasonable one-pair hands as well as most of the possible flush draws. In addition to these hands, the Small Blind could have a few more marginal draws, such as 6-5 and 5-3.

Again, I prefer a larger bet purely for value and protection, perhaps $340 instead of $260. While a few gut-shot straight draws improved on the turn, most of the time I will have the best hand, meaning I should continue value betting.

At this point, I think I am against two overly strong ranges, containing primarily straights, sets, and premium draws, such as a flush draw plus a straight draw. Against two of those ranges, my bottom set is in terrible shape. I lose to all of the made hands and I am only slightly ahead of the premium draws.

It is important to have the discipline to make a big fold even when you have what is normally a premium hand. If you study how specific hands fare versus various ranges away from the table, you will be able to recognize unprofitable situations and fold without getting in too much trouble. 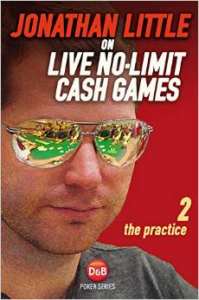 Fortunately, I made a snug fold on the turn and lost the minimum. If I happened to make the error of calling on the turn, I would have certainly folded to a bet on this terrible river. If you find yourself in this river situation with a set, you must get away from your hand. I frequently hear amateur players say something like “I knew I was beat, but I can’t fold a set!” They fail to recognize that while sets are normally quite strong, given the action and the board, in this situation they are terrible bluff catchers. Since very few people are willing to run an insane bluff in a multiway pot by blasting in tons of money, you must make the fold. If you fail you fail you get away from these situations, you will have a difficult time winning in the long run.

If you enjoyed this hand, you will love testing yourself with more than 100 additional hand quizzes from Jonathan Little on Live No-Limit Cash Games, Volume 2: The Workbook. Check it out and let me know what you think! Be sure to check back next week for another educational blog post. Thanks for reading.