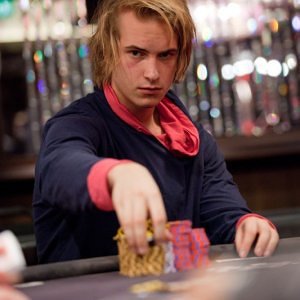 This summer at the WSOP, I decided to spend a bit of time away from the tournaments playing $10/$20 no-limit at Bellagio. After a few hands at the table, a Spanish kid to my left commented about how he didn’t like that I was writing down my hands in my notebook. It clearly had him rattled. He proceeded to play in a maniacal manner and bluffed off over $5,000 to me over the next hour. He was tilted. To be fair, I showed down decently strong hands, so he probably didn’t think I was outplaying him, but instead was lucky to make some strong hands. (I was actually lucky that he kept trying to bluff me!)

After a brief lull in the action, this hand came up. With $10,000 effective stacks, a tight, aggressive kid in the cutoff raised to $60 and I called with Ad-Jd from the button. The initial raiser in the cutoff had been completely in line (probably because he had a blatant maniac two to his left). I thought he would respond intelligently if I reraised him. This is a spot where I like to call with some of my strong hands to disguise the strength of my calling range. Also, I didn’t mind if the maniacal Spanish kid in the small blind entered the pot.

The maniacal Spanish kid in the small blind reraised to $340. The big blind and the cutoff folded. I called. I think my hand is much too strong to fold, given the maniac could easily be way out of line with a hand like A-3 or J-7. Especially when deep stacked, you must become comfortable with seeing flops in position versus players who have wide ranges.

The flop came 8h-7h-5c. The maniac checked and I bet $400 into the $760 pot. It is important to realize that I am setting up a multi-street bluff with this flop bet. I am not betting because I think my A-J is the best hand. I am betting to hopefully make my opponent fold an over pair by the river. In general, middle card flops are much better for the preflop caller than the preflop 3-bettor because people tend to 3-bet with big cards, meaning their range should contain fewer middle card hands than the caller. While this plan may be a bit optimistic, I have only shown down strong hands and my opponent is probably getting a bit gun shy, given I have beat him for 250 big blinds in an hour. I was not entirely sure of his flop checking range, but I assumed it would primarily be over pairs, Ace high, middle pairs, and total trash. My opponent somewhat quickly called my bet.

The turn was the (8h-7h-5c)-2h. My opponent checked and I bet $800 into the $1,560 pot. Sticking with the plan, the only way to make my opponent fold his over pairs is to continue betting the turn with the intention of making a huge pot-sized bet (or larger) on the river. Especially when the turn card completes one of the obvious draws, betting is mandatory. Notice that any Heart, Jack, Ten, 9, 8, 7, 6, 5, or 4 could all easily improve hands I would bet on the flop. This time, my opponent quickly folded, probably because he had a decent high card hand such as A-K.

If you want to succeed at poker, you learn to abuse your position. Many players in my situation would have been content to check down with a reasonable Ace high, hoping to win at the showdown. By betting, I won an additional flop bet and also prevented my opponent from betting the turn and river, forcing me to fold.

Thanks for taking the time to read this post. If you enjoy this type of hand analysis, you will love my interactive poker training site, PokerCoaching.com. Give the free quiz there a try and let me know what you think. Be sure to check back next week for another educational blog post.