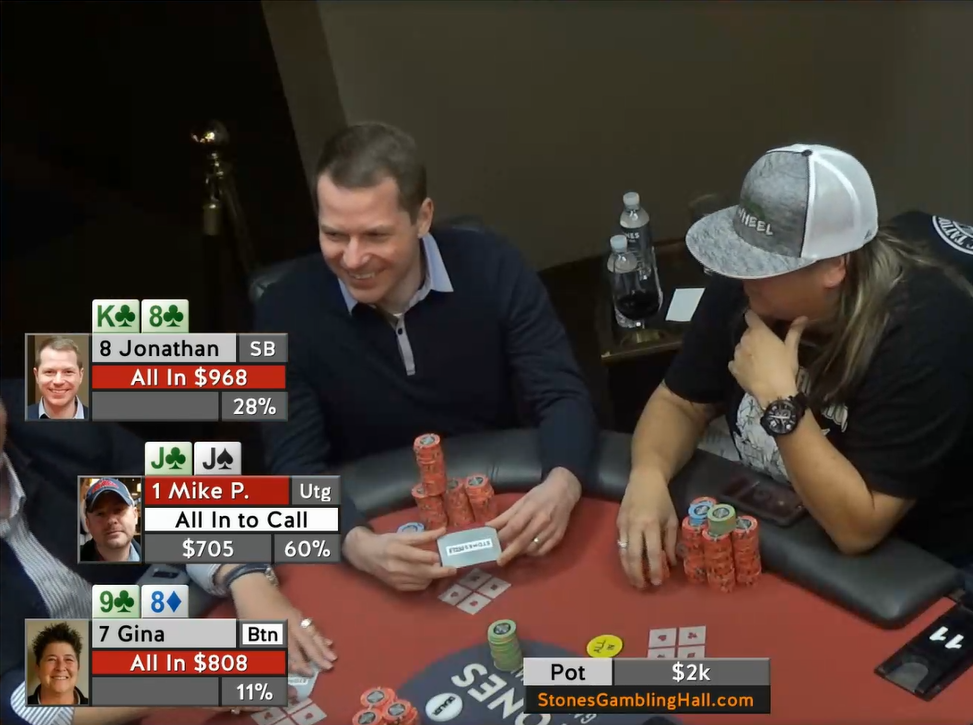 I recently had the pleasure of traveling to Stones Gambling Hall in Citrus Heights California to play in and commentate on their games. If you have never been to Stones, you are missing out. The venue is classy and the action is off the charts. It is a gambling hall, after all.

While observing the players play on stream, one thing that stuck out like a sore thumb was that many of the players loved to see the flop, but once any substantial amount of money went into the pot, they tended to have premium hands. I provided commentary for a $1/$2 game with Michael Loncar and he pointed out this trait on a regular basis. Just because someone is loose, splashy, and aggressive on the early betting rounds does not necessarily mean they are loose, splashy and aggressive on the later betting rounds or when significant money goes into the pot.

I had the pleasure of playing the “Veronica and Friends” $1/$3 no-limit hold’em game hosted by vivacious Veronica Brill. To say the game is wild would be the understatement of the year. There were regular straddles (up to $200) and most players enjoyed seeing the flop before deciding if they liked their chances. That said, the pattern Michael pointed out held true. When a lot of money went into the pot (especially if it was on the turn or river), the aggressor tended to have the effective nuts.

Unfortunately, I was still not convinced. I ended up losing what ended up being one of the biggest pots of the night after the cameras stopped rolling when one of these splashy players raised to $50 from early position over a $10 straddle, someone called, and I 3-bet from the big blind with As-Js to $250 out of my $2,500 effective stack.

I am fine 3-betting As-Js, even from out of position when I expect to get called by numerous inferior hands. Like I said, my opponents did not like folding before the flop.

While folding would normally be inconceivable for me because I have top pair on a coordinated board, if my opponent is primarily raising with hands he views as the effective nuts, I should fold because I lose to most of that range. In my mind though, he “should” have at least some draws and he may view a hand like Q-J worthy of playing for all the money.

I decided to call. The turn was the (Jc-Ts-8h)-8h. I checked and my opponent pushed all-in for his $1,500 remaining stack. I confidently called.
The 8 is actually a decent turn for me because I was already crushed by the sets, I did not expect my opponent to raise the flop with a random 8, and the draws and worse top pairs failed to improve. I cannot conceive folding once I get to this point.

My opponent didn’t look too happy when I instantly called him, but he rolled over Q-9 and won a hefty pot.

So, where did I go wrong? I am fine with 3-betting my hand purely for value before the flop, but my flop bet was min-raised, I should have at least considered folding. In the past, I would essentially never fold, but if the opponents are simply not bluffing often enough and are also not overvaluing worse made hands, I should be disciplined and make the fold.

In case you missed them, here the recordings of my commentary throughout the week:

Playing $1/$3 on Veronica and Friends

Thanks for reading! Be sure to check back next week for another educational blog post.